As we previously said on Facebook and in the First post, we’ll try to post some interview, with basics questions, because Old-School is about casual competition, drinking beers & meeting with friends.

The first “beta-tester” of this interview process is Guillaume Denoix, most of you already know him, met him or talk to on Facebook but you probably don’t know more, this is where the interview plays its role 🙂

Hi, I’m Guillaume, 36 y.o.
As for my root, it’s a little bit complex, but simply put : i’m French-Luxembourgish, born on the Island Réunion I began playing Magic at 12, early 1994.
At the time, we played a lot of role playing and figurine games with a group of friends : gamebooks, d&d, Warhammer…
Then Magic was released, shattering our habits !

We were a group of friends and we regrouped several times a week.
Ambience was rather funny and we were playing for pleasure/fun. I think the first tournament did was in 1995, for the Ice Age release.

For the format, at first it was rather simple : we played with cards we owned.
It seems to me that the firsts formats appeared mid-end of 1995, to separate T1 (Alpha-Revised) from T2 (4th – Ice Age), then ’97 with T 1.5.
As the community grew, and that we were all hungry for new cards, we were playing basically T2.
In 1998, I focused more on studies and the BAC (high-school diploma) approaching,  I stopped everything after Exode. I think I remember buying only one box of boosters, opening it compulsively and … leaving it in a corner of my room!

I took over in 2014 … the thing stupid … WoTC has released a game on iPad handy when you’re bored in the bathroom … in short, I quickly finished the game and it allowed to ‘win’ a pack with cards exclusive. The problem is that you had to go to the store to collect this lot. The sellers having a lots of chat (Thank you Soub’), I fell back into it.

Easy : in 1994 !
I think it was more in 2015, when the french (and parisian) community began to take an interest in the format. It was a good opportunity to bring out old pieces of cardboard.

I don’t remember very well, but I think it is by dint of talking old cards with a friend that the idea has sprung up to make a small tournament.
So we went to 2, to test the oldschool once a week in a Japanese restaurant in order to make the first OldSchool Parisian tournament at the end of 2015.

I will have two answers, even if they already feel the arrows and other halberts tickling my back.
For the competitive, I will say The Deck. 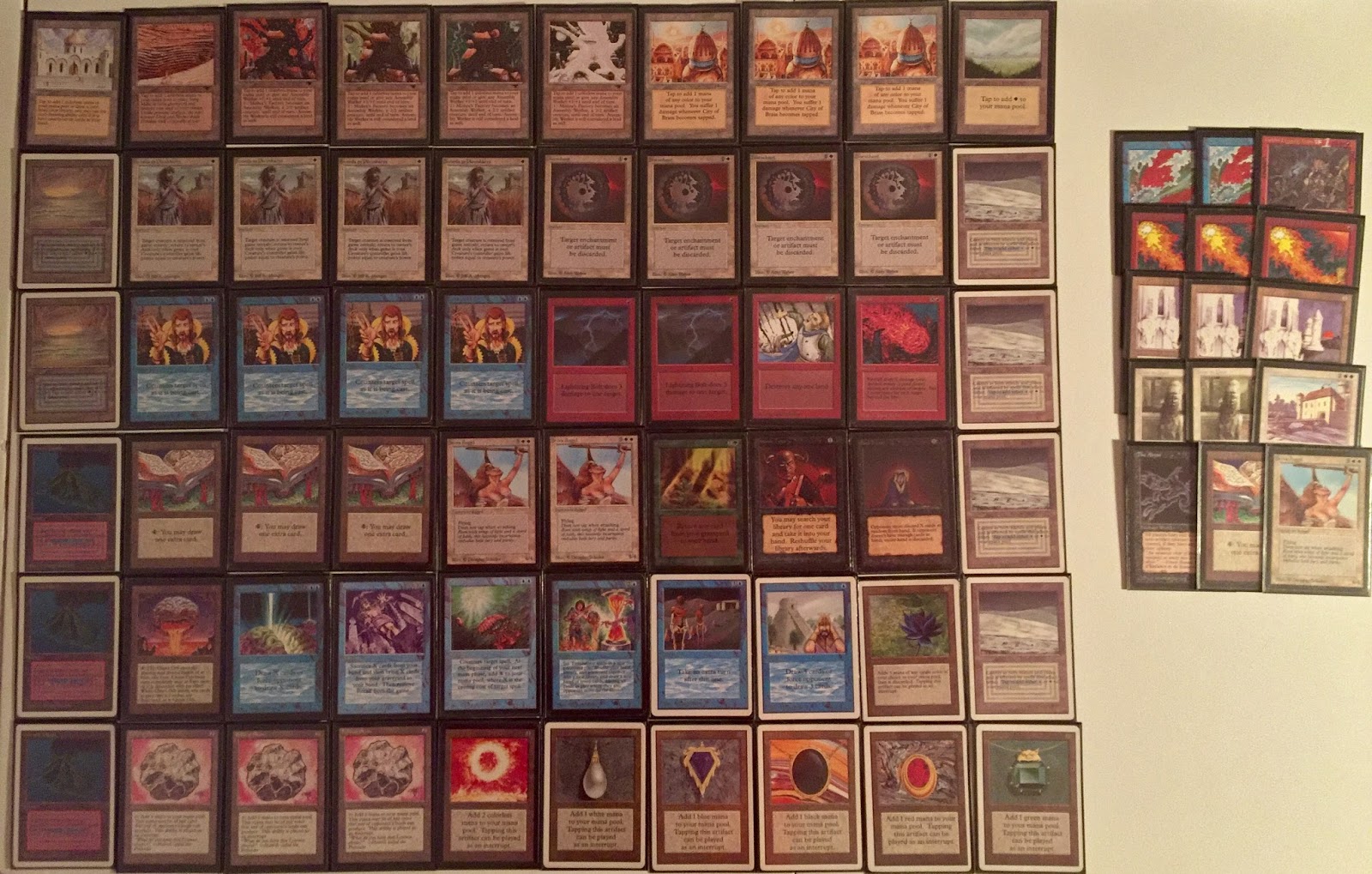 In general, The Deck is considered a sore in the format as it has answers to just about every situation, but let’s be lucid, does it win all the tournaments? No. It’s a very demanding deck and it’s easy to make a bad choice.
It is imperative to know how to play against and there, games are great.

Otherwise between friends, I enjoy playing all OldSchool decks, even Kobolds
With the Parisian group, we often test a lot of things.
For me, even if the OldSchool can appear a locked format due to the limited number of cards, no game is alike. 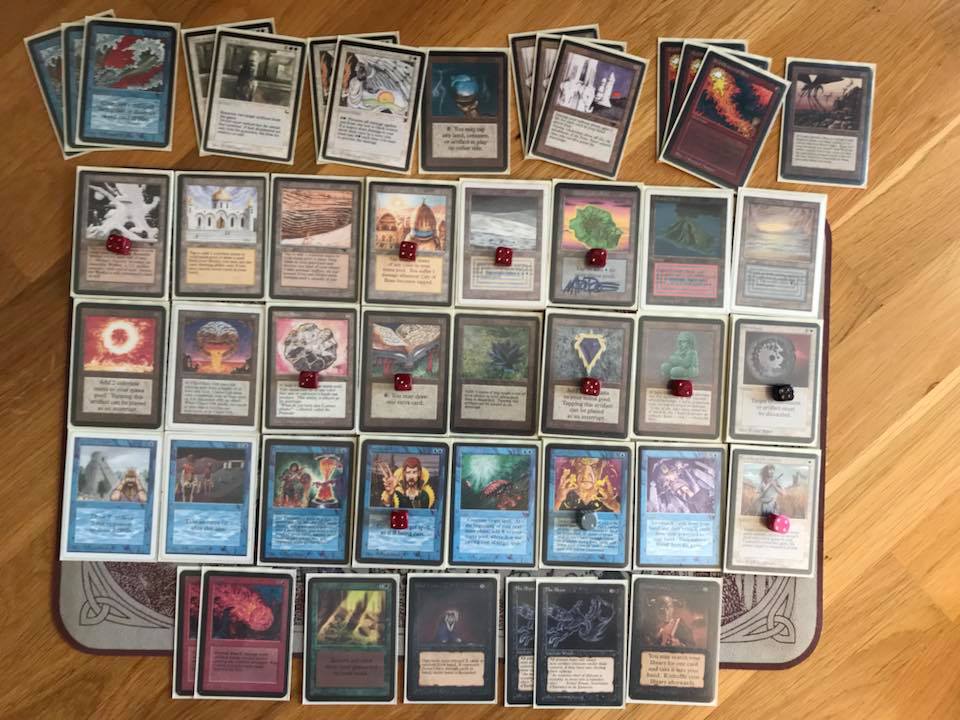 I have had the chance to keep my cards from the beginning, but I continue to invest in new formats, to have my playsets of everything in case of need.
One major project: Alpha.
This edition having more rounded corners, in my youth it did not have much interest. The Beta was much more ‘playable’, knowing that the first sleeves cames out in 1995 in ‘clear’ version and 1996 for ‘black’ backs so as not to differentiate the alphas.

Vast question.
I remember my mother was furious when I bought a Juzam Djinn a few dozen francs in the egg Cube (parisian shop) in 1996, or that I spend all my pocket money in the cards.
In hindsight, I will have to buy more!
I think that all the ‘old’, and especially the ‘restricted list’ cards, will continue to rise. These cards are iconic for any player … is not it the Holy Grail to own a Black Lotus?
The pool of players is increasing, but the number of these cards remains the same: Demand> Offer = price increase.
For the recent, the print volumes and the reprint policy are such that prices will remain stable for me.

I’m not sure I should say it here: p
But on the other hand, I remember the worst deal I did, being a youngster. Exchange a Dragon Shivan alpha against a beta whelp, but we must put this in context: Alpha not playable, the dragon was cheaper in mana and therefore more easily on the table … in short … let’s move on!

YES.
We have a good group of players in Paris, and we try to participate in European tournaments in ‘group’.
The furthest was in the USA this summer with a friend!

I particularly appreciate the atmosphere and kindness of OldSchool players.
With rare exceptions everyone gets along well and is here to have fun.
We’ve all become a bunch of friends.
At the first OldSchool tournament in Paris, with 15/20 players, a Mox Sapphire beta had fallen in the entrance hall of the shop that welcomed us … it obviously found its owner without worries, despite its value.
I mentioned it a little earlier, but I like the diversity of the format: no game is alike. We can do so much stupid stuff playing that we sometimes hear the players say “it can be funny if I do that …” and then go wild to die on a psychic purge.

I do not like players who do not pay attention to the cards of others. For example, I want to Chaos Orb your Juzam and to target I tap (I should say, with the nail) said Juzam ….

Having initiated and participated in writing these rules, I find them perfect: D

No, but let’s be serious two seconds, the OldSchool has two problems:
– The price of cards
– The Deck

For the price of cards, I think we made the right choice to allow reprints, while respecting the spirit of the format: no foils, art / layout of the identical card.
This allows more players to learn the format, start in budget mode and gradually move upmarket.
One question remains unanswered: should the EC / EI be authorized? I have no clear opinion on this. On the one hand these two sets have never been legal tournament, on the other, it would allow young players to access the P9 cards more easily.
I think this question will be brought up again in 2018 with the community.

For The Deck, we had long discussions (should I say debates).
Some were in favor of even banning The Deck from tournaments, much like some other communities who give the Deck players a penalty.
Some wanted to limit / ban cards from the deck, like Mishra’s factory, Jayemdae Tome, Counterspell, Disenchant …
These solutions were for me too radical because they went against the format and especially would impact other decks.
For me, one of the reasons for the strength of The Deck is that aggro decks are victims of the absolute power of Mishra’s factory: a 3/3 (in defense) that is able to block, and kill !!, all the threat from the beginning of the game …

I proposed to play with the original rule of MTG concerning the blockers typed.
Basically, if a creature blocks during a fight and activates one of its abilities that needs to be typed, that creature does not inflict any combat damage.
So Mishra becomes 0/3 and aggro decks can be competitive again.

We also allow Fallen Empire to give a little more to the aggro decks and especially the threat of the discard that impacts the decks controls (and therefore The Deck).
Personally, I do not find that Fallen Empires brings much to the format, except the risk of discarding, but that, I think, is very negative and disrupts the game.

Finally, I think that mana burns are a must in the French rules

Given the number of tournaments, whether in Paris, France, or abroad … do not change the rules too often. Once a year no more.

Facebook has established itself as a standard. All the communities of the world meet there and exchange.
2017 was a very good year in communication and initiatives.

My collection of Prodigal Sorcerer, What Else ©

For those who do not know it, I have always loved this card, and I collect it in all editions, languages, foil, and quirks.

If we continue with Fallen, We should restrict Hymn to Tourach.

Otherwise, I find that the ban-list is consistent at the moment, no need to touch it, even if one could ask the question of unrestricting Mana Drain in a format with mana burns…

A card we don’t see much : Chains of Mephistopheles

Can I say All of them ? They all have their specificities, and trigger different emotions. Douglas Shuler because he made Prodigal Sorcerer, Christopher Rush because he is the illustrator who made all the big cards, Poole because it is the master of the blue, Jeff A. Menges, RKF, Quiton Hoover ….

Channel+Fireball turn one woth Black Lotus, a mox and a Taiga ?

For tournaments : it’s NO!
For tests or even play with friends, no objection, as long as they are not fakes : so home printed card, land card written with pen, etc … We must recognize immediately that it is a proxy.
Even if it’s actually nicer in its deck, and sometimes undetectable with sleeves, it’s imperative not to give business to fake card manufacturers.
For me, true / false proxies are the plague number 1 currently because there will always be ill-attentive who will want to take advantage.

The OldSchool is a great format, and 2017 has been a year full of initiatives: blogs, tournaments, skypes, etc. We really feel that things are moving forward.
I want to thank everyone who worked on the format;
– The ‘Swedes’ and especially Magnus for having a good idea in 2007,
– The different people who live and breathe OldSchool around the world: Andreas, Dave, and everyone I forget.
– The different communities, with a special mention for the fine Italian team Megu, Lorenzo, Francesco.
– And finally all the players!
See you in 2018