After few weeks of brainstorming and talking, I was determined (along with some friends) to start a blog about Magic The Gathering – Old-School – French Community.

Because I think we’re rather active, but we don’t talk about it much on social media and we thought it’d be great to spread the word that, yes, we love cheese & wine, and complain about everything BUT we also like to play Old-School 🙂

I’ve only be active in this Parisian-Community for about a year, but others were playing it before, some at the very beginning. We all love testing new decks, some better than others, some weirder  ( hi Vincent ! ), hoping this blog will reflet our inventions from our greatest mind…

So there was this blog and…. Rodolphe Ambroise also got the idea we needed like a “mascot card” (because we’re also sheep, not only french) so… he pulled out the upcoming mkm spike from his sleeve, the greatest, the underrated, the fabulous : Durkwood Boars. 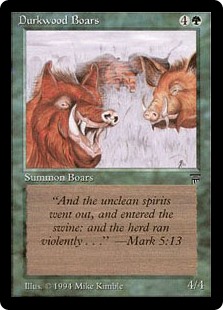 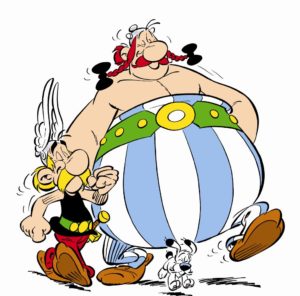 It’s from the Comics “Asterix and Obelix”, a belgian comics (called Bande-dessinée) picturing 2 guys from a tiny village in France fighting against the Roman Empire : The small guy of the left is called “Asterix”, the fatty on the right could be me, but it’s “Obelix”, and who cares about the dog ?

Anyway, those 2 guys describes our ancestors, called “Gaulois” (Gallic), and they love eating Wild Boars in every issue : 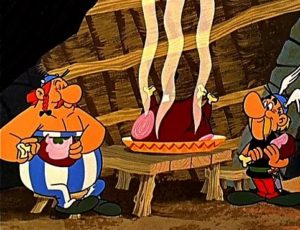 So there it was, the most “french” card in the Old-School universe, maybe some day (hopefully soon…) we wil find a better one 🙂

There is already some reports published about the French Championship which took place in November, also a late-so-light report of the Fishliver Oil cup (Italy – October) and some about our ~weekly small gathering.

We will soon add interviews about french players, we aim at 2 interviews / month, but maybe weekly, and why not strangers too ? 🙂

We will continue small reports of our gathering, we’re building a page about our noticeable decks (see menu), you can also find other websites which you surely know already and our Facebook pages.