After the first (relative) success with Guillaume’s, we contine our series of interviews with Phigue !

Hello, My name is Philippe (we will say Phigue0 for the nickname I use for a long time), 36 years old, from the south of France (a city near Montpellier, and, like any university town, it drained a lot of Magic players – wink to those who knew the Excalibur shop at the beginning of Mtg – ).

Hyper-casual start with rules not assimilated (I remember that we paid the launch cost of the creatures every turn!) Then relaxed and casual atmosphere in high school. Some tournaments as standard in the 2000s at times when the meta was not degenerate. For my part, always a casual mind and decks “homemade” (rats / kikki-jikki for example), no noticeable performance except an unexpected qualification for the French Championships (not going, nothing to do there)

break #1: starting high school in 95: a friend plays Mtg, I say that I have cards and he redeems all my valuable cards. Of course it is by seeing them play that I become hooked to “Gigic”; I started with dozens of communes and uncos, nothing more.

break #2: around 1998: combination of “a lot of friends stop because higher studies is serious” + release of urza’s sage and a power level / meta that I do not like: tolarian academy, sneak attak, gaea’s cradle, bloomdrain decks. The release of “premium” will eventually convince me of my “disenchantment” with Magic, at least what it has become. It is also at that moment that I come across an ad in the Lotus Noir magazine late 98 / early 99 which offers selling lots of 15 common alpha-beta or 15 arabian for 100 Francs (like 15 euros). Living in the province, a little isolated from major retailers, without internet, it’s a great opportunity for me to acquire some of these cards that make me dream, I go for it!

break #3: before going to Paris around 2006/2007: I sell almost all my alpha, some legends (tabernacles 35 euros …), arabian but I keep my beta because I have the idea to sell everything except a beta SET NM that I try to complete.

I put together my very first ABU “swedish rules” oldschool deck at the end of 2013. It was pure aesthetics since there was no French community yet and I do not have Skype, I think this deck has never really been played. The first exchange of ideas took place on olschool topics on the websites Magictrade and Solomoxen. So if we summarize the debut deckbuilding: 2013; start playing the decks: 2015?

Like many Europeans, it’s the blog of Magnus de Laval oldschool-blogspot.com that made me discover, in the end, the format I had always dreamed of. Many pages were inaccessible because only in Swedish but very quickly, everything was available in English: the articles were numerous, well illustrated, made by enthusiasts, a real happiness.

I played for a long time a WW that I tried to bring “next level” with blue splash : 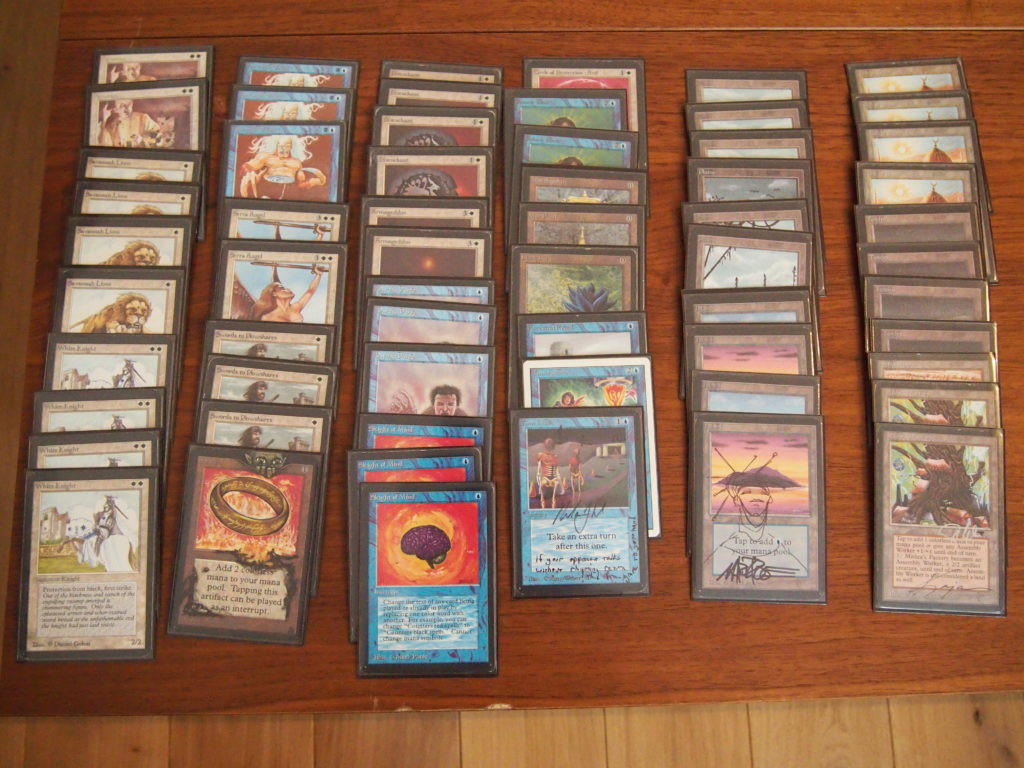 it is with pleasure that I have seen the good results of decks approaching my original idea, eg those driven by Alban Lauter or Andreas Cermak.

Otherwise at the moment I’m on a deck based on Nether shadow and full of mini-tricks in WBR: 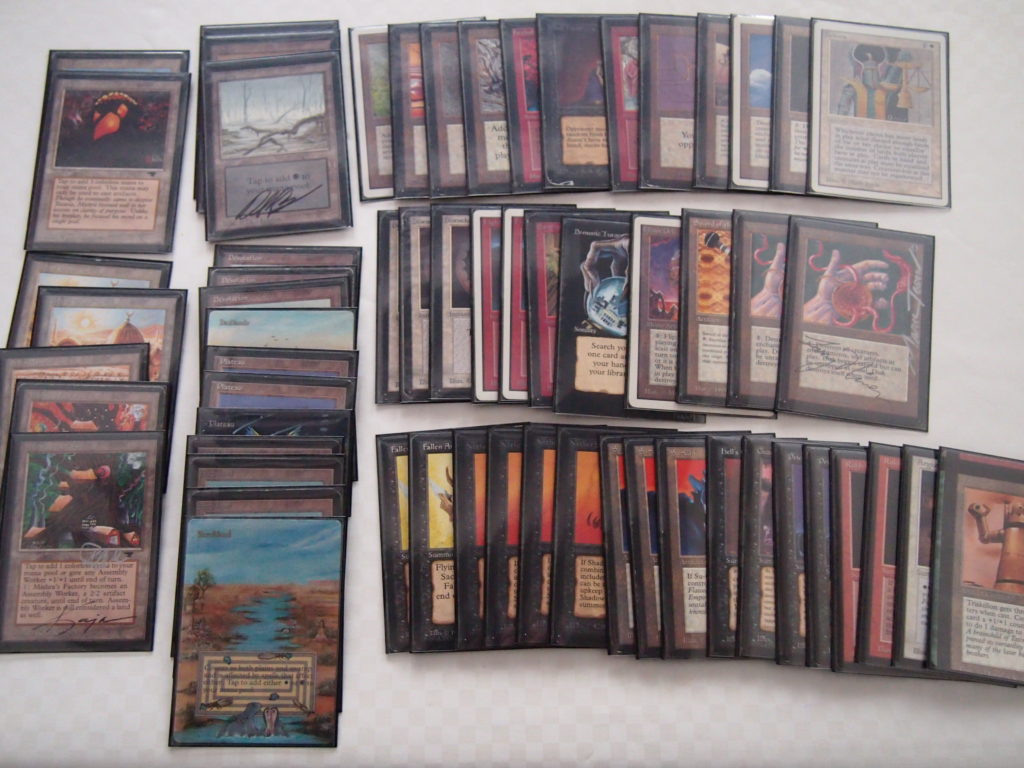 I had usually kept a lot of cards, at least 1 of each oldschool playable card but I also invested a lot in recent years, and sold everything that was not oldschool.

Faced with the impossibility of paying me spoils / P9 / duals AB at the beginning, I decided to bet on underused cards when the oldschool was in its infancy. I scrawl for dozens of oldschool deck lists on notebooks (which I kept, see pic): I think I had a lead or edge on cards that came back frequently and that I could find low prices, eg: underworld dreams, winds of change, avoid fate, spirit link, gloom, serendib efreet, city in a bottle, sindbad, psionic blast … 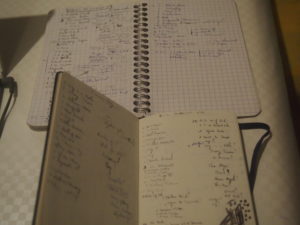 I tend to think that unless the world economy crashes, the peak prices will be reached at the retirement age of the current target players (30/40 years old today) who discovered Magic as a teenager. Not sure that it goes through generational transition (I can be wrong). Say otherwise: continued price increases for the next 10/15/20 years. The deep and irreducible attachment of these players to the oldschool format + the limited release of cards + the speculators who are now betting on it = no reason for immediate price drop

no ideal deal for 2 reasons:

The ideal deal is one in which you recover something that you missed and you also see that your deal partner is happy: on this account, I remember a tournament where I get swords and serra A / B + cities arabian, I loose gauntlet of might beta and misprint arabian: 30 minutes of deal, nice cards, everyone leaves happy

Not available immediately but in absolute terms it’s a nice idea: to go to the fjords in Norway or Honolulu to play oldschool, isn’t it a dream ? Especially if you can pair with 1 or 2 more days to visit (because to get 30 hours of Mtg in a cellar, even with all the love I have for oldschool …)

If I had to put two flats:

The French rules are fine, even if I think we have a little “ass between 2 chairs” (between the Swedish format and our own B / R): we could perhaps be more avant-garde on the restrictions / unrestrict / editions allowed. But for that, you have to be a fairly large community and run tournaments regularly to learn from them, which is not the case today.

After I’m not going to be choosy, I just fell on a decklist (EC rules?) Of a blue splash mooblack that had crushed his local tournament: outside the power, 4 sinkhole, 4 mine strip, 4 hymn to tourach , 4 hypnotic specter … for sure it’s strong but I imagine that the opponents did not take much pleasure during some parts; I cross my fingers so as not to find myself in a format where it would be allowed.

A rotation of once a year  seems to me enough to draw lessons.

I communicate by Facebook mainly, I read some blogs that I find nice too. If I had to mention one or two: Gordon’s blog on card focus is very nice, I also like the offbeat tone of underground Mtg. In France, Myrdhyn Wizzard and David Desjardins have written pleasant articles. 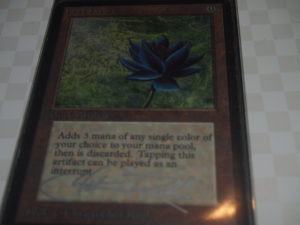 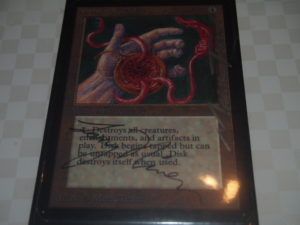 I really like the “gentlemen agreement” where Mind Twist and Library of Alexandria are removed. I do not really like the broken / boring cards which breaks fun and can turn-table a game on their own.

Otherwise, I would like to see what the meta would say if we restrict mishra’s factory for a year in swedish rules / frecnh rules, or an authorization from Fallen Empires with Hymn to tourach restricted. I do not think that players are ready for more innovative proposals such as a restriction / authorization cards 2 copies although I think it can be an interesting contribution in terms of balance of the game.

I already mentioned The glasses of Urza, right? Shhhhhhhhhhhhhhhhhhhhhh, it’s a secret … But to be honest, the underrated cards, I’ve made it my specialty but there are few “discoveries” and peel the lists. But at the moment, you always have a head start if you look not only the rare legacy: let’s quote 1 card by extension: ghazban ogre, archeologist argivien, reincarnation, mental bomb..

favorite combo: splash blue in a white deck to target an opposing gloom with sleight of mind, it matters?

Opportunity missed 2 times to find a black lotus beta nm at a fair price, it is these “failures” that made stop the beta set nm

I almost never play proxies and I do not really like it (I prefer the card written on a basic land that a nice photocopy); on the other hand on the reprints I reviewed my judgment: I went from ayatollah pure oldschool to tolerant when that the illustration is the same and the card non-foil.

I would say that as long as many players / shops thought that the 93/94 would be a fashion that would only last a short time, it was all good for us, but now only from a financial point of view , the golden years to recover the cards are behind us. On the other hand, when it comes to gameplay / meta / meeting and interacting with players, I think we are in the middle of a blessed period. If 2018 continues on the basis of the growth of the format in 2017, it will become top!